Our Story So Far

The original idea for a collective giving group in WA was conceived in 2011 over a glass of wine (or two) shared by our a couple of our original committee members. Soon afterwards, the Impact100 model was was introduced by James Boyd following his research sabbatical to the US. Our slightly adapted version, Impact100 WA, was launched in May 2012. It was the first international chapter of the  American concept which is now active in over 50 US chapters.

In 10 years, Impact100 WA has been proud to reach some amazing milestones as well as inspire 7 other groups to setup new Impact100s in Australia and other giving circles.

Check out our latest booklet

It outlines many of the stories and achievements as well as displaying the fabulous photos that help to tell it all: 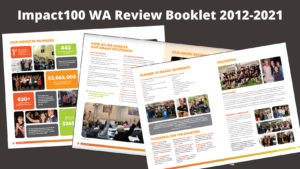 Milestones Since Launch in May 2012

We think there’s plenty to celebrate here and if you’d like to join us in continuing to reach our grant giving goals continue then click here to donate.

In 2017 we were proud to produce our first publication.

Find out all about what the first 4 years were like for us, our donors and our Primary Grant winners – it makes for inspiring reading.